Mount Feathertop is the second highest mountain in the state at 1,922m. The mountain has long been known for the beautiful vistas of the surrounding mountains and valleys that can be seen from its slopes. Being close to the Mount Hotham Ski Resort the mountain it is also a popular cross country skiing destination.

The hike to the Mount Feathertop summit from the Melbourne University Mountaineering Club hut on the north west spur.

The mountain is unusual in that the summit slopes are steep, while most others in the alps have a rounded dome.

The mountain was named by two stockmen working on the Bogong High Plains in 1851,  It is said that late snow drifts in the mountain gullies gave the mountain an appearance of a feather and so the name.

Particularly in winter, the mountain can be hazardous and any trips up the mountain should be well researched as to route and conditions.

A view of the Ovens Valley from Mount Feathertop. The Ovens River rises at Harrietville and makes its way north west to join the Murray at Lake Mulwala, near Yarrawonga. 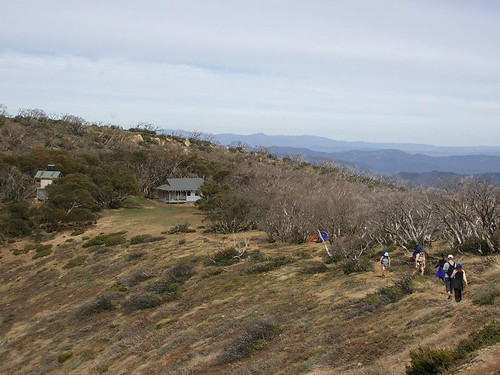 The Federation Hut, given the name as the original was built by the Federation of Victorian Walking Clubs. The hut is located on the Bungalow Spur that leaves from near Harrietville, with a 9km hike before reaching the hut and with a further 2km walk to the summit.