The spectacular vistas of The Grampians – Gariwerd

Situated between Stawell and Horsham and with the villages of Dunkeld, Pomonal and the Halls Gap close by. The Grampians National Park covers some 167,000 hectares of sandstone mountain ridges that provide some of the most spectacular scenery in Australia. In the local Aboriginal language the Grampians are called ‘Geriwerd.’  Aboriginal peoples have lived in the area for what is estimated to be 20,000 years. The major mountain ranges within the park are Mount William (the highest point at 1,167m). Serra, Mount Difficult and Victoria Ranges in the central/north and Mount Abrupt and Mount Sturgeon to the south. 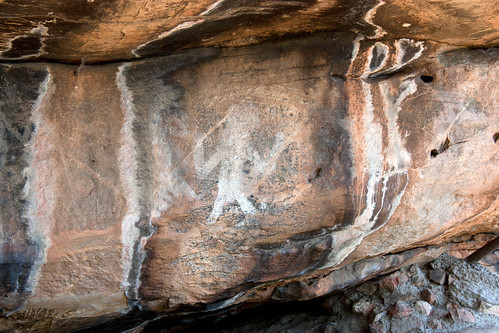 Aboriginal rock art at the Ngamadjidj Shelter. There are at least 120 known rock art sites from 1,000 to 10,000 years old in The Grampians and possible many more. The last two were found in 2015. Details and the location of sites that can be visited can be found at the Brambuk Living Cultural Centre. 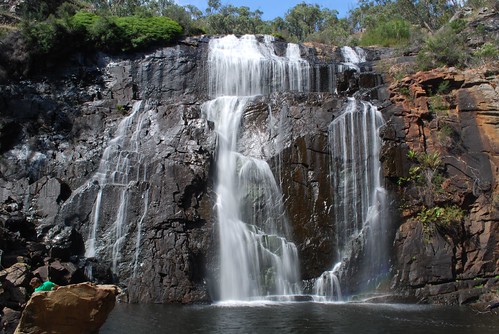 The beautiful MacKenzie Falls in which the Mackenzie River cascades some 40 metres over the cliff face to continue its course north west until it reaches the Wimmera River just before Horsham.  The falls can be found 18 kilometres from Halls Gap.

Halls Gap as seen from the Boroka Lookout

The name Halls Gap originally referred to the valley beyond a gap in the Grampian ranges, which, after the cattle rustlers were removed from the area, was used for grazing of cattle by the first settlers. The first European to enter the gap was C. B. Hall who had established a local cattle run and discovered the gap by following aboriginal trails in the area.

The area is also well known for its year-long wild flowers and each year a Grampians Wildflower Walkabout is held (usually in October). 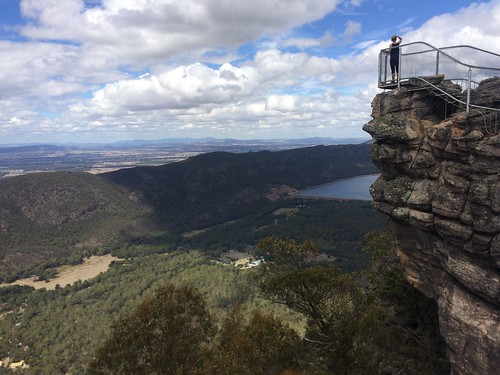 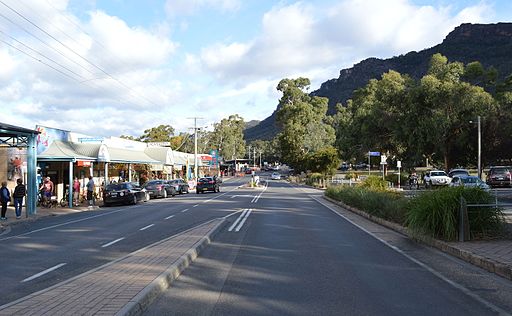 Halls Gap – the main tourist township of The Grampians

By the early 1900s the area had grown tremendously popular as a tourist destination and a village was established which now bears the name.  The village is located adjacent to the Wonderland Range park and within a short drive or hiking distance to some of the Grampians National Park most spectacular northern features. 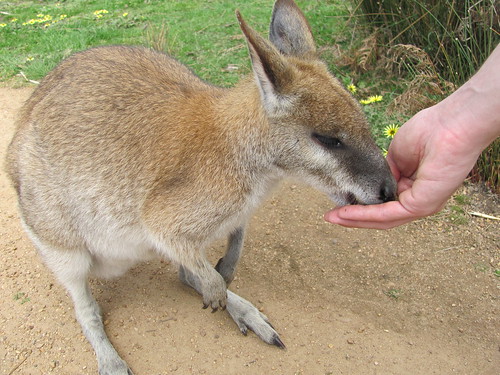 Wallaby feeding at Halls Gap Zoo" (CC BY 2.0) by holidaypointau

Halls Gap Zoo is 7 kilometres outside of Halls Gap and set on 10 hectares of land with the Grampians National Park as the backdrop.  The zoo has over 160 different varieties of birds, reptiles and animals including Australian native wildlife, African and North American animals.

The zoo is open daily from 10m to 5pm with the exception of Christmas Day.  Admission charges apply for entry and for guided tours.

The Wonderland Range is a series of weathered peaks, crags and valleys running north – south just to the west of Halls Gap. The range is part of an ancient beach that at one time was the shore of the Australian continent.

What you see in the Wonderland is many layers and tons of sandstone laid down by wave action some 430 million years ago when the Wonderland Range was a beach and then subjected to millions of years of erosion. If you stood in the Wonderland at that time looking west would appear a mountainous continent and looking east, a deep ocean. 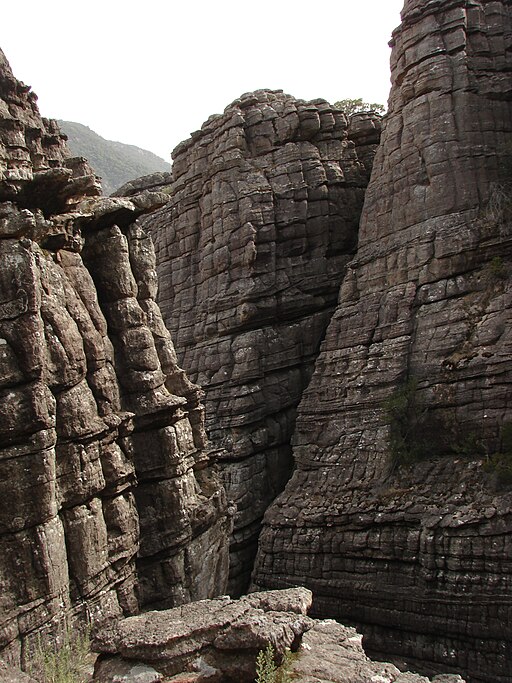 The ‘Grand Canyon’ of the Wonderland Range can be accessed via a 900m looped walk.  It is the place in the Wonderland where it is easiest to see just some of the thousands of tons of sediment that were deposited at the ancient beach and then the layers turned into sandstone under enormous pressures. 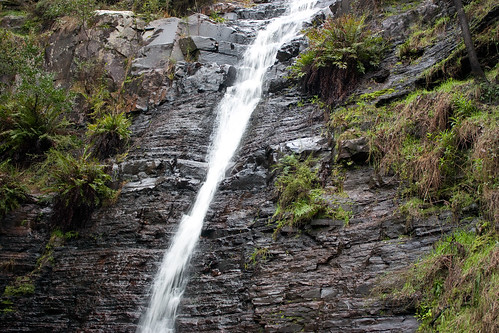 The Silverband Falls found in the Wonderland Range.   The falls are the Dairy Creek cascading over a cliff face to disappear underground, emerging some 50 meters to the west. 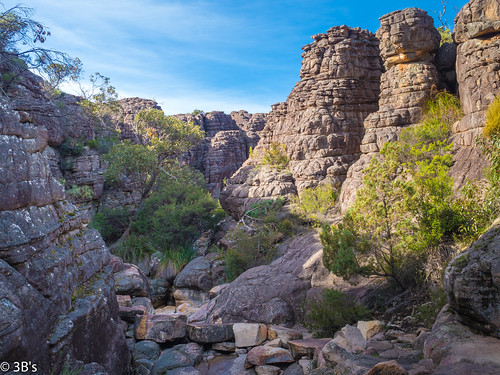 Reeds Lookout and The Balconies

View of the Balconies and valley below.

The view of the Victoria Valley from the Reeds Lookout.

The view from the Boroka Lookout, looking down into the Fryans Valley, Halls Gap and Lake Bellfield.

The lookout is 15 kilometres from Halls Gap and access to the two viewing platforms is a 5 minute, but steep, walk from the car park.  Toilets are available at the car park. 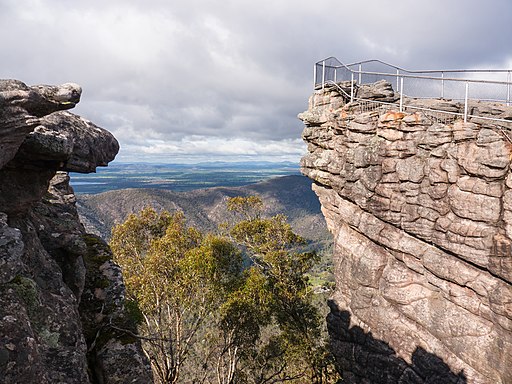 The Pinnacle observation platform jutting from the mountainside above Halls Gap.

The easiest and often used way to the Pinnacle Lookout is from the Sundial Carpark and via Devils Gap, a distance of 4.2 kms. There are two other main routes via the Grand Canyon and the other from the base of the mountain, depending on your dexterity. All routes offer wonderful views of the ranges, wildflowers and wildlife along the way.

Rock Strata at Mount William.  The Grampians – Gariwerd were formed from sedimentary rock laid down some 430 million years ago when the coast line of Australian ran through the park along a north-south aspect.  To the west, one would have seen a mountainous continent and to the east, a deep ocean.  Thousands of meters of sand and mud were deposited over time and then compressed into rock.   Later forces pushed up this rock at various places to form the mountains of the Grampians, with the original layers of sediment visible in the cliff faces.

The closest village to Mount William is Pomonal. Pomonal is surrounded by grazing land and a winery and a good accommodation alternative if you would like to base your Grampians vacation at one of the quiet and relaxing retreats in the area.

By Melburnian (Own work (digital photograph by author)) [GFDL or CC BY 3.0], via Wikimedia Commons

Mount Sturgeon and Mount Abrupt at the southern end of the Grampians National Park.

Mount Sturgeon can be explored via the 6.4 kilometre walk from the village of Dunkeld through woodlands and up rocky terrain of the mountain itself to the spectacular view from the summit.

The explorer Thomas Mitchell camped for three days at the base of Mount Sturgeon in 1836 and both named the mountains and his reports of the richness of the land resulted in the arrival of the first settlers. 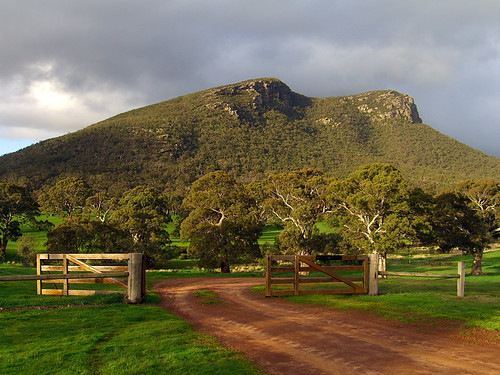 Adjacent to the very southern end of the Grampians National Park and at the foot of Mount Sturgeon is the township of Dunkeld. The rural township is the southern gateway to The Grampians and is surrounded by farms including those supplying the highest quality merino wool.

Dunkeld is known for the prolific number of bird life that frequent the area in the wetlands and woodlands around the town.  The town also has its Arboretum where you can find local plant species, an abundance of wild flowers and water birds on the lake.