Built from a wealth of gold and the major city of the goldfields.

A modern city of over 90,000 people, Bendigo’s beginnings are with the gold rush and it’s gold fields were the greatest in Victoria  A city with splendid architecture, a deep artistic culture and literally bursting with things to do, it is an ideal location for a goldfields vacation.

Bendigo sits in a rich agricultural region fed by the Campaspe and Loddon rivers.  Wheat, fruit, dairy products and market garden crops are produced in rural areas surrounding the city and they support large sheep populations. North of the city toward the Murray are vineyards and wineries.

For a time, the richest city in the world.

All in all, since gold was discovered in 1851 in Bendigo, 780,000 kilograms or 25 million troy ounces of gold were found, firstly on the alluvial fields and then in the mines working underground reef gold. The figure and its commensurate wealth even today is a staggering amount.

With the discovery of Gold the population of Bendigo and many of the surrounding towns swelled with an estimated 40,000 miners working out of what was then a tent city.  It did not take long at all, with the wealth of the gold finds, for the city to grow and its many public buildings being fine examples of 19th century architecture.  Many of these buildings can be seen along Pall Mall and the nearby View Street and many buildings preserved and classified by the National Trust.  These include, to name a few; the 1887 post office built in the Italianate style, the 1897 law courts, the 1987 Shamrock Hotel, the 1872 Beehive store and the prominent, granite 1881 Alexander fountain.

With the major gold finds having come to an end, Bendigo has survived and expanded as a regional centre, being the fourth largest population centre in the state.

By Dansforth - I took this picture with my own camera, it is a public place. Previously published: Not applicable, CC BY-SA 3.0, Link

The former mine ‘poppet head’ or winding tower located at Rosalind Park in central Bendigo.  The tower can be accessed to the viewing platform and provides great views of the surrounding city. Originally from the Garden gully United mine and moved to the park in 1931.

The heritage listed Bendigo Town Hall was originally built in 1869 but has seen several additions and remodelling done in the late 9th century. As with many of the Bendigo buildings, the town hall represents the trememdous wealth the city enjoyed during the gold rush.

The Golden Dragon Chinese museum is a proud testament to the influence of the Chinese people in Victoria and Australia. The museum opened in 1991 with the purpose to document, interpret and preserve the Chinese heritage in Australia.

In 1879 to assist in raising funds for the Sandhurst Benevolent Asylum and Hospital, Chinese residents organised a a Chinese easter parade and carnival which was tremendously popular and a financial success.  The festival has continued each year at Easter under the auspices of the Bendigo Chinese Association.  Many of the parade items used over the years can be found in the Golden Dragon Chinese Museum.

Located adjacent to Rosalind Park and as part of the Golden Dragon Chinese museum is the Chinese garden, the Yi Yuan (garden of joy) garden.  The garden was built in 1996 and based on similar gardens found in the Imperial Palace in Beijing, China. 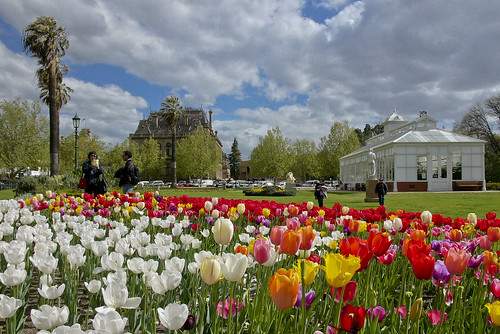 Rosalind Park is central to the city and sits on what was a grassy woodland along the Bendigo Creek.  In 1892 the area was designated as the Government Camp precinct and housed the police barracks, goal, lockup and other government buildings. By the 1860s, plans were afoot to make it into a park for the people of the city which was put in place in 1870 with a gardiner being assigned and the garden laid out much as can be seen today.

The park includes the poppet head mine winding tower lookout, the Cascades, a 19th century water feature, fernery and Queen Victoria and George Lansell gardens. The park is also adjacent to many of the gold rush era buildings of the city and the Chinese heritage centre of the Golden Dragon Museum and Chinese Gardens. The conservatory (shown) at Rosalind Park was built in 1897 and contains different flora and foliage displays throughout the year. The conservatory is surrounded by beds of blooming flowers.

Founded in 1887, the Bendigo Art Gallery has undergone a series of refurbishments and extensions to the original building, but has kept the original style in the grand tradition of European galleries. The gallery displays permanent collections of 19th century and contemporary Australian and international art and features special exhibitions. 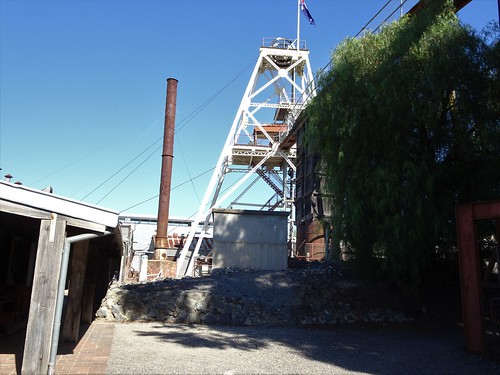 Located within the city confines, the Central Deborah gold mine was an actual working mine which was in operation from 1935 to 1954. The mine reached at its peak 412m below ground with 17 separate levels and 15kms of tunnels. During the period of operation the mine produced 929 kgs of gold. The mine has been refurbished and opened to the public through underground guided tours, tours of surface equipment, gold panning demonstrations and an artifact and history museum. Open 9:30am to 4:30pm every day except Christmas Day. 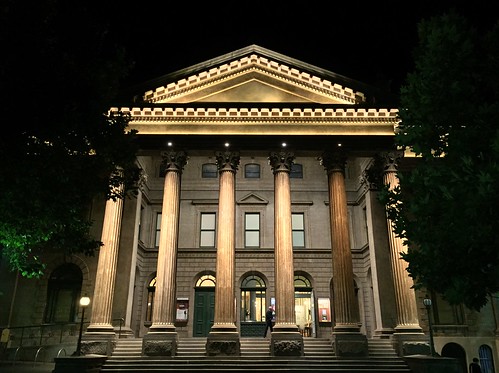 The heritage listed The Capital – Bendigo Performing Arts Centre, one of several venues dedicated to the performing arts in the city.

Since 1890 the city’s trams have been a popular means of public transport and are now operated as a tourist tramway and museum.