Located on the very southern edge of the Southwest National Park, the picturesque Cockle Creek consists now of a caravan park, and the most southern point in Australia accessible by road.

By Maelgwn [CC BY 3.0 ], from Wikimedia Commons 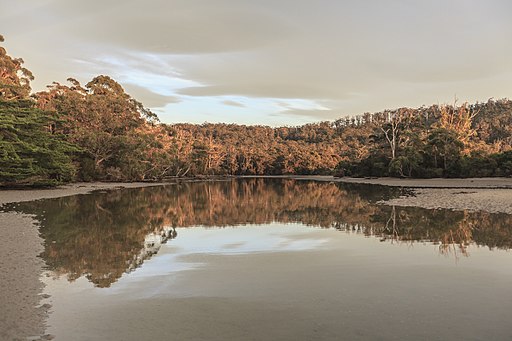 Cockle Creek is the southern entrance to the Southwest National Park and is just 148 kilometers south of Hobart. It provides not only boating and fishing in the local area but hiking around the coastline and access to more adventurous hiking trails in the national park itself.

Apart from the spectacular coastal views, the area was often used by aboriginal peoples and middens can be found along the coastline.

Evidence of the former European settlement also exists in the form of ruins, abandoned tramways and gravestones, all being gradually reclaimed by the forest. There is also the 1836 Fishers Point Navigation Light and Pilot Station ruins which can be accessed at low tide.

By Tirin aka Takver - www.takver.com [CC BY-SA 3.0 or GFDL], from Wikimedia Commons

The bay was used as a port of respite for ships taking prisoners to Sarah Island in Macquarie Harbour in the early 19th century and a pilot station and eventually a whaling station was established there. The whaling fell into decline and for a brief time a discovery of coal and timber production kept the settlement going but these two also declined and the area fell into ruin by the 1850s.