The largest island on the east coast, Maria Island is just an hours drive from Hobart and forty five minute ferry ride from Triabunna then brings you to the 19 kilometer long island that has a penal colony history and now is a protected national park.

The  Commissariat Store was built by prisoners in 1825 as part of a penal colony experimental use of the island and remains in very good condition. Currently the national park visitors centre.

Much of the eastern coast of the island consists of steep cliffs including the Painted Cliffs, to the south of Darlington, which are etched by wind and waves of the Tasman Sea and display striking colors in the sandstone.

By Allan Smyth at en.wikipedia (Transferred from en.wikipedia) [Public domain], via Wikimedia Commons

Darlington Bay and the small settlement of the same name is located on the north of the island where the ferry service from Triabunna arrives. It is also the location of what was once the island’s penal colony and later short lived commercial endeavors. 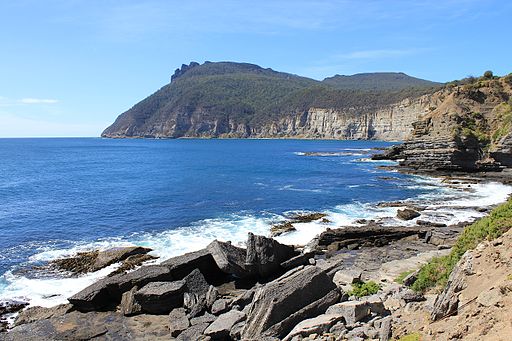 At the very north east of the island is Fossil Bay. The coastline of the bay is formed by limestone cliff faces that contain fossilized shells estimated at being 200 million years old.

The tallest point of the island, Mount Maria rises some 711 meters. The island appears as two parts and is mostly covered by Eucalypt forest with some areas of coastal heath joined by a sandy isthmus.The island contains plentiful wildlife including wombats, cape barren geese, eastern grey kangaroos, red-necked wallabies and the smaller wallaby-like, pademelon. A population of Tasmanian Devils was introduced to the island is 2012 as an isolated “insurance population” for the endangered species.

Darlington was a Convict settlement from 1825 – 1832 and then again in 1842 to 1850. After each period the site was abandoned with the convicts being returned to the mainland. There are fourteen preserved buildings from the convict period including the commissariat store (1825) and the penitentiary (1830), mess room, miller’s cottage, barn, hop kiln, chapel, and ruins of the religious instructor’s house.

The island was named by the Dutch explorer Able Tasman in 1642 after the wife of the Governor-General of the Dutch East Indies at Batavia, Maria van Diemen.

There are several hiking trails available on the island, details of which can be found at the Visitors Centre.  In addition to the heritage buildings there is an open-sided shelter with gas barbecues, coin-operated hot showers, toilets and picnic tables at Darlington.  Camping is permitted however there are no shops on the island so all provisions will have to be brought with you.  You can bring your own bicycle or hire one at Darlington (best to pre-book on bike hire via Parks Tasmania)