Port Douglas, with a local 18th century gold rush was considered for a time for development Queensland’s northern city.

The railway, however, ended up going to Cairns just to the south in 1885, which then became the major city of the north.

A view from the lookout on Flagstaff Hill

Flagstaff Hill is famous for its panoramic views of Port Douglas and the Coral Sea.

This view looks down over Four Mile Beach, famous for a time in the 1930s when used as a landing field by aviators, including Charles Kingsford Smith. 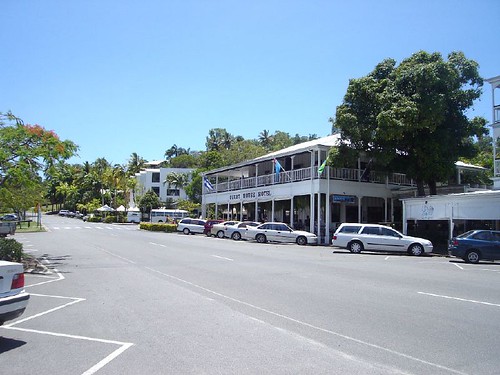 Jorge Láscar from Australia, CC BY 2.0, via Wikimedia Commons

The Port Douglas Sunday market has been going for 35 years and offers local produce and hand crafted goods.  The market is a ‘Cotters Market’ where all offerings were made by the stall holders.

The village was established on the Dickson Inlet which provides shelter for its commercial and leisure fleets.

Shown is the ‘Lady Douglas’ which provides tours of the inlet.

The inlet is salt water in  the main although in the upstream reaches has fresh inlets.

The old court house was completed in 1879 and has since  been established as a museum of local history.