The main city in the south and gateway to the Orana, Dubbo’s history and prosperity revolved around the sale and export of livestock, just as it does today.

By MichaelGG at English Wikipedia [Public domain], via Wikimedia Commons

By MichaelGG at English Wikipedia [Public domain], via Wikimedia Commons

Now a modern city of some 36,000, Dubbo has many very well cared 19th century buildings including the 1890 court house and gaol both from 1870s. And unusual for country towns, rows of Victorian terraced houses and Edwardian detached homes.

The Macquarie River running under the old railway bridge at Dubbo.

The city came into being due to the increasing amount of trade in cattle north and south of the region in the mid 1800’s and its location on the banks of the Macquarie River. The story goes that a young Frenchman by the name of Jean Emile de Bouillon Serisier was taking part in a around the world voyage and had a bout of appendicitis while off the coast of New South Wales. Upon gaining his health, Serisier went to the local town of Wellington on the Macquarie River in 1847 to open a a trading post. The ever entrepreneurial Serisier heard of the large cattle drives both north and south that were stopping at the Macquarie River and moved his operations down stream and set up a crude store there. And so the beginnings of Dubbo.

The name Dubbo comes from the name of the property of Robert Venour Dulhunty, one of the original settlers in the region. The name has aboriginal origins although it is not clear as to how specifically Dulhunty came by it. The word means ‘red earth’ in the local aboriginal and there is also a story that Dulhunty named it after an aboriginal elder who camped in the location.

Today Dubbo has one of the largest stockyards in Australia and services the local pastoral industry which includes cattle, sheep, lambs, pork and poultry. 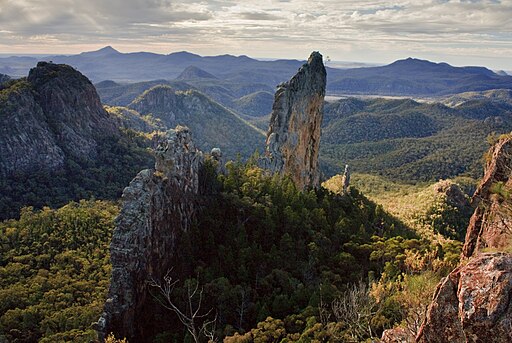 By Mgillaus [CC BY-SA 3.0 or GFDL], from Wikimedia Commons

‘The Breadknife’ in Warrumbungle National Park

The city now has the Taronga Western Plains Zoo next to it and a short drive north is the spectacular Warrumbungle National Park and a little further the Pilliga region and National Park.

The entrance to the old Dubbo gaol.

The Shoyoen Japanese Garden, as part of the Dubbo Botanical Gardens.