An outpost on the west of the Orana and former port on the Darling River to service the wool farmers of the region, Bourke is on the eastern edge of the arid terrain of central Australia. 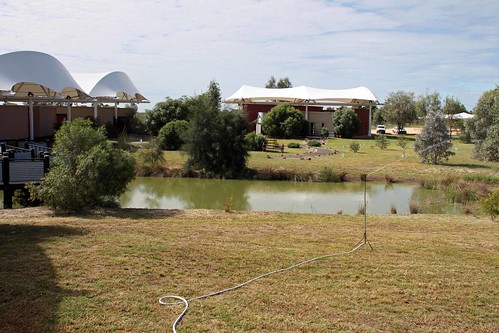 By Ian Sutton from Collinsville and Oberon, Australia (Court House, Bourke Uploaded by berichard) [CC BY 2.0], via Wikimedia Commons

Kr.afol at the English Wikipedia [GFDL or CC-BY-SA-3.0], via Wikimedia Commons 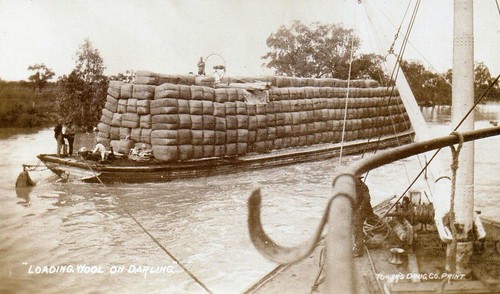 A very typical sight at Bourke in the 19th century was the transportation of wool from the stations all around the region down the river.

Bourke had its beginnings as the Darling River port for the sheep stations that dotted the region when paddle steamers plied the river.

The Mount Oxley rises up 150 meters above the arid plain, just to the east of Bourke.

The explorer Charles Sturt had visited the region in 1828 in search of the rumored Australian inland sea but climbed to the top of Mount Gundabooka to the north and only saw the expanse of arid central Australia before him.  The Darling River had been in drought and Sturt turned back giving a poor report of the region. 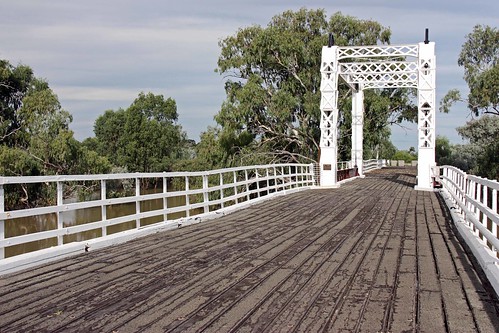 The heritage bridge built over the Darling at Bourke has the central section able to rise so the paddle steamers and barges could pass underneath.

It was in 1835 when another explorer Thomas Mitchell arrived and built a small stockade, Fort Bourke, which became the beginnings of the town and from which it got its name.

Its position on the Darling River meant that Bourke was a transport hub between the outback stations and the eastern states’ markets.  The town became a  Cobb & Co. Coach terminus by the 1880’s and this was followed by the railway in 1885.

With the decline of the river trade routes, Bourke lost its port but it has continued to be a central service and transport point for the agricultural efforts of the region which consist mostly of sheep farming.

The phrase ‘Back o’ Bourke’ is well known and well describes Bourke’s position at the edge of the great expanses of New South Wales outback and central Australia.

By Conollyb at English Wikipedia (Transferred from en.wikipedia to Commons.) [Public domain], via Wikimedia Commons

While the lifeblood of the region and town, living next to the Darling River was at times precarious with the river known to flood the town. The town is protected now by levees.

The Darling River region was also the home to several Aboriginal tribes and notably the Ngemba and Barkindji people. The influx of European settlers and towns people greatly disrupted the indigenous people’s way of life and many fell to European diseases. Some worked at stockmen at the local sheep stations and some were used as skilled trackers. Today around 37% of the town’s 2000 people recognise their heritage as indigenous. 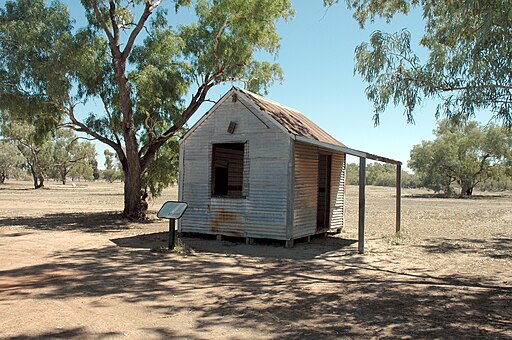 The mosque at the Bourke cemetery which was used by the Afghan camel drivers who operated the camel trains to the outback stations.

For overland transport the trusty camel was used, an animal suited to the conditions surrounding Bourke and beyond.