The World Heritage listed Hyde Park Barracks operates as a museum of convict life in the beginnings of the Sydney colony.

By The original uploader was J Bar at English Wikipedia. [GFDL or CC-BY-SA-3.0], via Wikimedia Commons

A room of the Female Immigration Depot. To balance the genders in the colony, from 1848 the barracks was used as a staging point for females brought to the colony.

A reconstructed convict bunk room at the barracks. At times up to 1,400 men and boys were housed in the barracks.

Renovation and refurbishment works on the barracks have resulted in finds of artifacts from various periods which are now on display. 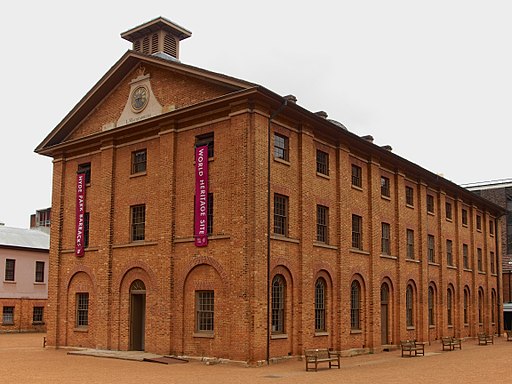 Designed and built by convicts

The Hyde Park Barracks were designed by a convict, Francis Howard Greenway, who was immediately pardoned by the colony governor on seeing the completed work in 1819.

Initially built by convict labor and to house convicts who were working for citizens in the Sydney area or on government projects, it was used in this fashion until 1948. It then was re-purposed as the Female Immigration Depot from 1848 to 1886; a staging place for females from Britain arriving to the colony either as part efforts to balance the genders in the colony population or to assist in the arrival of female relatives of colonists. The building doubled as a female asylum from 1862 to 1886, after which it was used as law courts and government offices.

The building was added to the World Heritage List in 2010 under the category of “Australian Convict Sites” and is currently operated as a museum.

A display at the museum of the simple fare provided the convicts living there.

The bright but easily recognizable uniform worn by convicts.