A few moments to the west of Bathurst, Abercrombie House is a Victorian, Tudor style house built of granite around 1870 by the Stewart family and currently serving as a family home, open for tours and functions.

By Ian Sutton from Oberon, Australia (Abercrombie House) [CC BY 2.0 ], via Wikimedia Commons

By Maypm [CC BY-SA 4.0 ], from Wikimedia Commons
The house was built by James Stewart, the son of William Stewart who was the Lieutenant Governor General of New South Wales. Stewart, having arrived in Australia in 1825, was awarded lands next to Bathurst for his services. The house sits on a 20 hectare property, including landscaped gardens and not far from the Macquarie River. The property remained as the home of the Stewart family until 1929. It was purchased in 1969 by the Morgan family who have made extensive renovations to restore this historic house. Self guided tours of the house are available Wednesdays to Sundays with guided tours and historic talks on advertised days. See the Abercrombie House website for details. 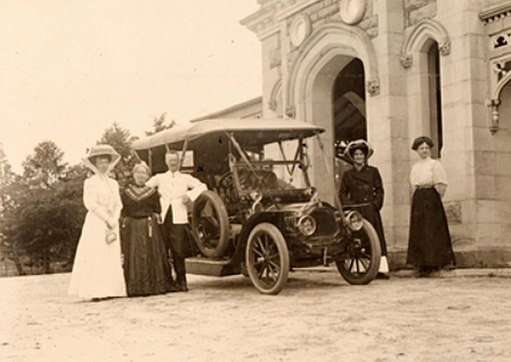