On the southern edge of the city of Newcastle and the state’s coal industry and the beginning of the North Coast, Lake Macquarie covers 110 square kilometers and is Australia’s largest salt water lagoon.

The lake is a very popular boating and fishing area. Due to the routinely placid conditions, the lake is also popular for sailing with several sailing clubs set up in the communities along its banks.

At the northern end of the lake is the city of Lake Macquarie, now directly adjacent to Newcastle and a modern city of almost 200,000 people with many associated with the coal mining that occurs in the region. The region has several smaller towns and villages around the lake and on the coastal strip separating it from the ocean.

The lake was the home of the Awabakal people for thousands of years. In their language Awaba meant ‘plain surface’ as an apt description of the lake.

European involvement with the lake followed an accident of navigation, where a Captain William Reid en route to retrieve coal from the Newcastle region took a wrong turn on the coast and ended up in the lake system. For many years the lake was named “Reid’s Mistake”. 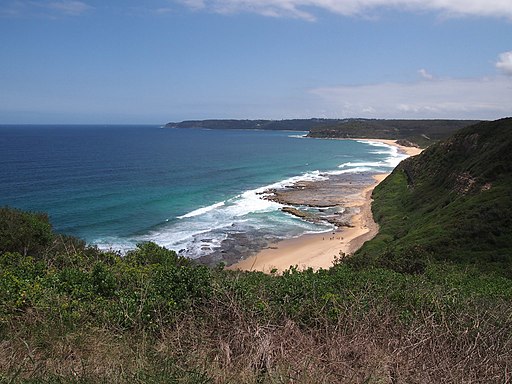 As a holiday region, the lakes area is separated form the ocean by a narrow strip of land for much of its length. Along the coastal region are several holiday beaches many with interesting headlands and coastal walks in addition to swimming and surfing.  To name a few:  Redhead Beach – family beach and surfing, the sweeping Nine Mile Beach, Blacksmiths Beach – protected family swimming, Caves Beach – family beach with sea caves and rock pools. Catherine Hill Bay – swimming and surfing. Several of the beaches are patrolled during the summer and holiday months.